The Codex Palatinus Germanicus 5511 was written in the 15th century by nuns of the “Poor Clares.”2 Originally the manuscript was described as instructions for pearl embroidery. When Ute Bargmann examined it in 1999 she realized right away that it was not about embroidery at all, but about brocaded tablet weaving that, in some instances, incorporated pearls. 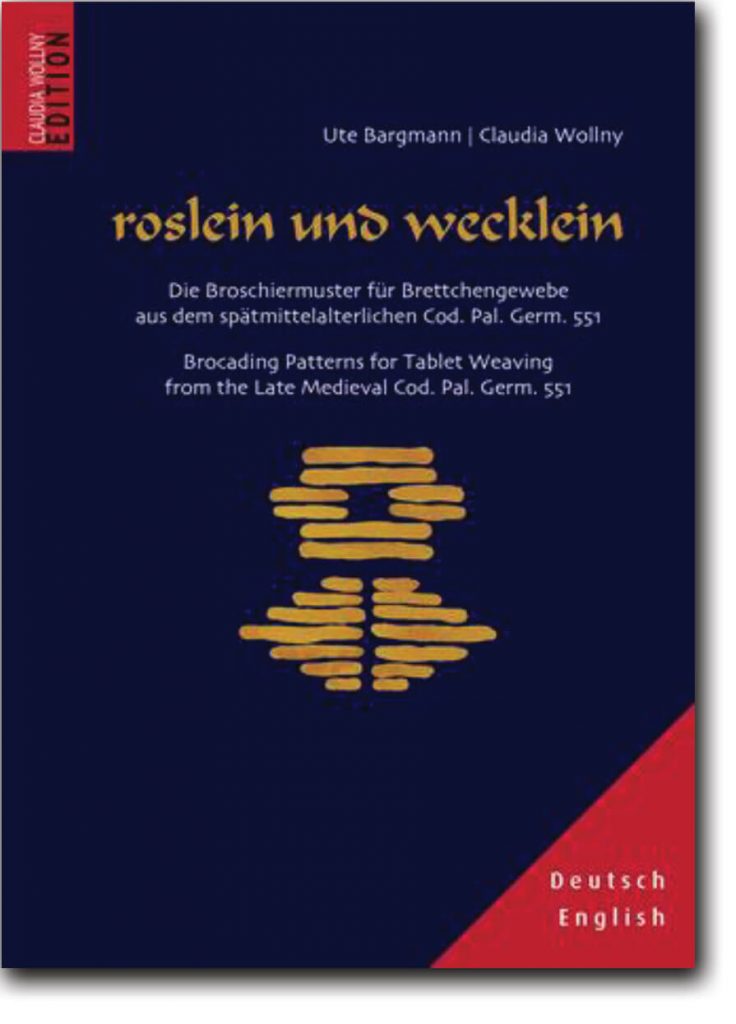 The first time I heard of the manuscript was in 2005 or 2006. It was the proceedings of the 2002 Textile Society of America Symposium listing the lecture by Ute Bargmann: “Woven Bands, Medicines and Recipes: Cod. Pal. Germ. 551. The Adventures, Provenance and Contents of a 15th Century Manuscript Held at
the Library of Heidelberg University in Germany.”3 It described the manuscript, including illustrations of some of the patterns.

After I read the symposium proceedings, I wove one of the patterns published there and tried to get more information on this historical pattern manuscript. There was a German homepage with few patterns from the Cod. Pal. Germ. but it did not provide more information.

In 2013 I accidentally came to know that the manuscript was digitized by Heidelberg University and so I had access to these old patterns, which needed to be checked and translated before weaving. From this source I wove several motifs from the manuscript and liked them, as they are different from most other historical patterns. I wanted more but didn’t have the time to translate more than a handful of patterns.

Now Ute Bargmann and Claudia Wollny have published the book roslein und wecklein. They have created a wonderful book that includes not only the manuscript’s more than 300 historical patterns, but also pictures and a translation of the handwritten manuscript. For each historic pattern the authors provide a weaving draft plus additional information if there was an error in the original (and there were quite a few errors). I love to thumb through the book. Each time I do, I see new details.

The authors have put so much work into this book. In 2002 Ute Bargmann had completed her research of the manuscript but within the last year she has added more snippets for roslein und wecklein. The manuscript was originally a notebook kept by nuns who taught young women of the upper class before they entered a convent or got married. The nuns, who were also members of the upper class, were refurbishing the emperor’s robes, hence the use of pearls in the brocading.
They also used exotic material, such as peacock feathers. These patterns allow plenty of room for a tablet weaver to experiment. The Cod. Pal. Germ. 551 was more than just a pattern book for brocading; in turn roslein und wecklein is also more than just a pattern book.

Ute Bargmann and Claudia Wollny have researched the history of the Cod. Pal. Germ. 551 and share it with us. In the book you will find quite a lot information on the 15th century and on several nuns of the “Poor Clares” who wrote in this notebook at the convent. Ute Bargmann and Claudia Wollny translate all the old German words, explaining them extensively as needed and in a glossary at the end of the book. They provide a detailed introduction to brocading with graphs and, as
usual in a book by Claudia Wollny, all the answers you will need and then some.
The book is complete with patterns for the designs, sorted by the numbers of tablets required and lavishly illustrated by Claudia Wollny’s high-quality photographs
of Ute Bargmann’s woven bands.

Brocading is time-consuming but, as the photos show, the results are stunning. This book is a worthy framework for the Cod. Pal. Germ. 551. I am impressed by the result these two have published. 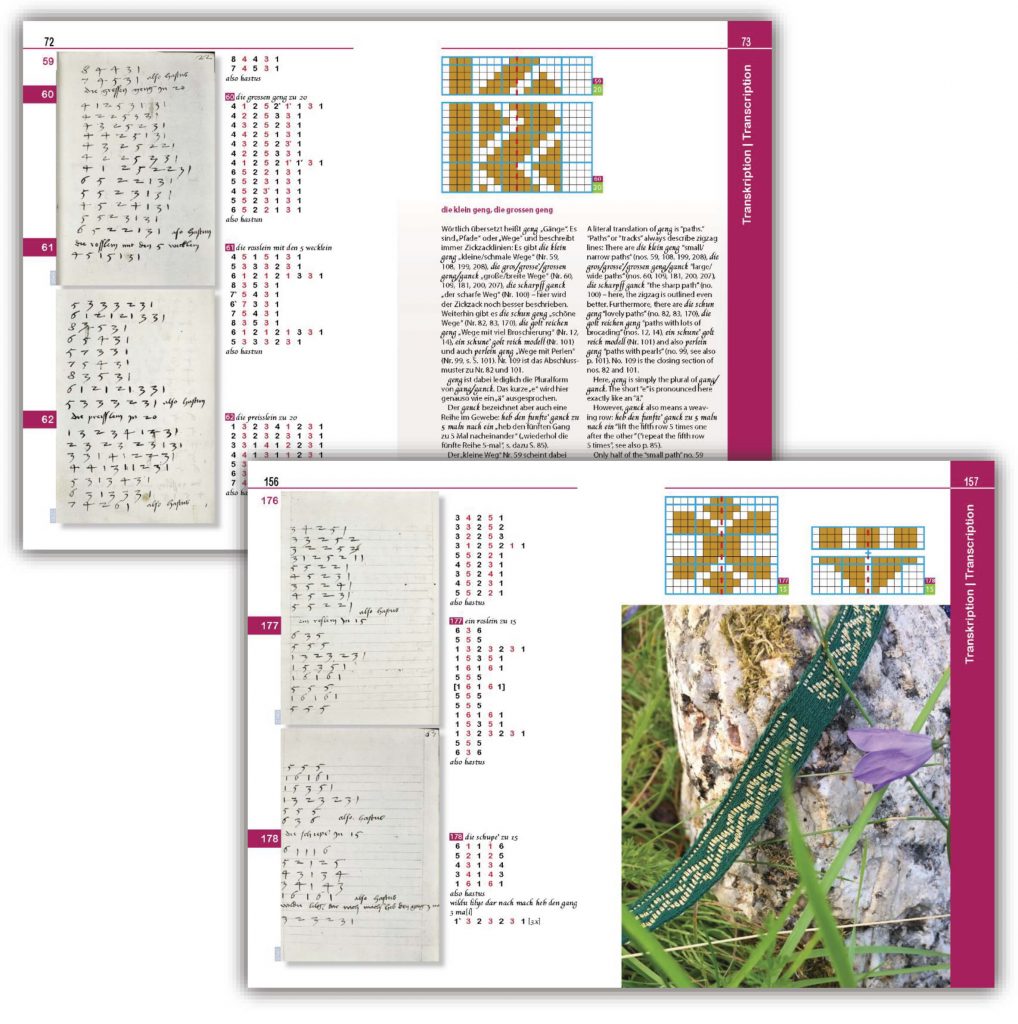 1 Latin for “German manuscript 551 of the Palatina collection,” which is
widely known by the abbreviation “Cod. Pal. Germ. 551.”

3 The text of Ute Bargmann’s 2002 talk is itself
fascinating and available for free download from
http://digitalcommons.unl.edu/tsaconf/index.7.html#
year_2002