I would like to introduce a new heading in the Journal: the mystery weave. The idea originated with a post by Sarah Pritchard in the tablet weaving sharing group on Facebook. The principle is simple. Sarah shares every three months a new pattern to weave, without showing the finished band. Group members can give it a try and post their results in a photo album. I liked the idea very much and decided to push it a step further.

As all tablet weavers know, graphs and threading directions are numerous. My proposal is to give in every issue a graph, complete with instructions and origin. Over time, it will be possible to create a recapitulative chart with threading conventions like the one started by Nancy Smothergill (TWIST Summer 2014).

Personally, I am a great user and admirer of Guntram’s “tablet weaving thingy” and its patterns in gtt. Numerous weaving patterns in gtt are available on the internet. I also like creating new
patterns with the program. A special thanks to Guntram, first for creating this wonderful little program, and secondly for allowing me to use whichever GTT patterns or screenshots I wished for this first mystery weave.

About GTT: Guntram’s tablet weaving thingy is a freeware created by Eckhard Gartz (known in the SCA as Guntram von Wolkenstein). It can be downloaded at https://www.guntram.co.za/tabletweaving/gtt.htm. I highly recommend reading the user’s manual if you want to get the best out of the program, from designing to spotting the source of a mistake during the weaving itself.

A collection of various patterns, including double face, brocade, and letterings, is available at https://www.guntram.co.za/tabletweaving/patterns/patterns.html The real program would show you not only the threading and the turning sequence but also the finished result as well as the reverse side. I decided, however, to omit the picture of the finished product to tickle your curiosity.

So, are you ready to weave this first mystery weave? Send photos of your work for next issue’s gallery! Of course, all forms of creativity (fibers, colors, textures…) are highly encouraged.

Are you an author and do you want to share one of your patterns for the next mystery weave? Is there a pattern convention you would particularly like to see discussed in an upcoming issue? Don’t
hesitate to contact me at editor@tabletweavers.org. 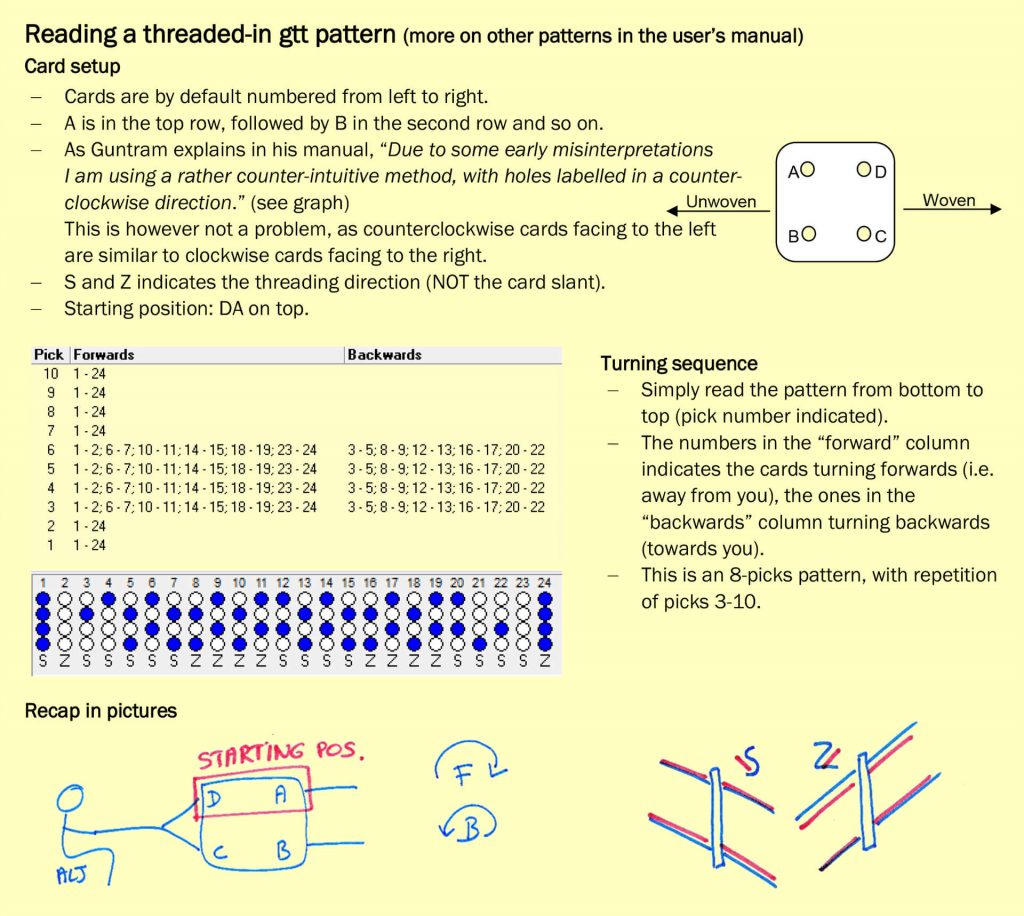